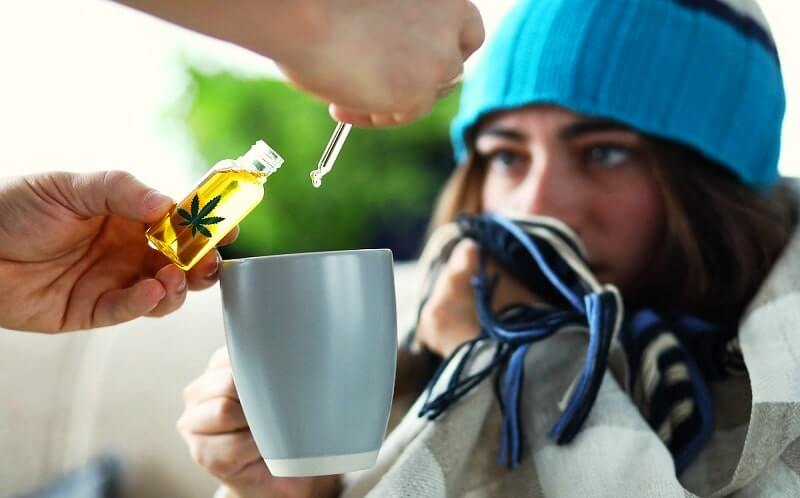 The common cold is a contagious viral infection caused by about 200 different varieties of viruses. The use of Cannabis For The Flu is essential there.

Science has shown that the cannabis plant has numerous health benefits. Many ailments, including debilitating chronic diseases, seem to benefit in one way or another from the properties of this plant. But what about less serious disorders? Could marijuana help fight something as simple as the common cold or flu?

50% of the time, it is caused by rhinoviruses, but other viruses that also cause this condition are influenza viruses, coronaviruses, and adenoviruses.

What causes the common cold?

When these viruses enter the body, they attack the mucous membranes of the nose, throat, and mouth. A few days later, the virus could also reach the lungs. The body’s immune system fights against the virus in all of these areas, causing inflammation and overproduction of mucus that transports dead and infected cells to expel them from the body. This is what causes typical cold symptoms to occur, such as a runny and stuffy nose, a sore throat, a cough and sneezing, and (in the case of the flu) fever.

If you are reading this, you may already know the anti-inflammatory effect of cannabis. Research on the subject shows that cannabinoids such as THC, CBD, CBG, and CBC help reduce inflammation throughout the body. Some cannabis terpenes, such as linalool, limonene, or eucalyptol, also have anti-inflammatory potential.

Our body’s attempt to fight off cold and flu viruses cause automatic inflammation in the throat, sinuses, nose, and lungs. Cannabinoids and terpenes in marijuana help reduce inflammation in these areas and therefore relieve symptoms such as a runny nose and runny nose.

Current research has made it clear that cannabis affects the human immune system. The way it does this, however, is not 100% clear.

Some studies show that cannabinoids suppress the immune system, which is what ultimately gives them their anti-inflammatory effect. This is good news for people with disorders characterized by chronic inflammation. But it’s also important to remember that acute inflammation is a necessary bodily process and a sign that our immune system is actively fighting off a threat (such as a virus).

A note on smoking marijuana during a cold or flu

Cannabis certainly has the potential to combat cold and flu symptoms. However, if you are thinking of using marijuana when you are sick, it is probably best to avoid smoking it.

Inhaling smoke from a pipe, joint or bong irritates the throat and lungs, increasing inflammation in these areas. This could aggravate the symptoms and even increase the time it takes for your body to fight the virus. Therefore, it is better not to smoke when you are sick. Instead, try the following alternatives.

Prepare your own cannabis infusion

Cannabis tea is a great way to consume cannabis without the negative effects of smoking. To prepare a cannabis infusion, do not just put the bud in a cup of boiling water, as this will not extract the cannabinoids or terpenes from the plant material. Instead, you should first prepare an oil or honey with cannabis, and then mix it with the tea.

Here is a brief summary of how to make cannabis honey:

To make cannabis honey for Cannabis For The Flu, decarboxylate marijuana in the oven. Crush the herb, spread it out on a lined cookie sheet, and place it for about 30 minutes at 110 ° C. Remember to move it a little in the middle of the process.

Put the cannabis and coconut oil in a jar. Boil the jar in a saucepan with water for 2 hours to infuse the oil. You will need enough water to cover ½-¾ of the jar. After 2 hours have passed, strain the oil with a fine cloth or a coffee filter. Make sure you get as much oil as possible.

Finally, mix the oil and honey with the help of a hand mixer. You will have a creamy honey that you can use to sweeten any type of tea.

Another great way to consume marijuana when you have a cold is through groceries and tinctures. The oils and tinctures can be ingested alone or mixed with food and drinks, to provide a strong dose of cannabis without the need for smoking. For a ready-made, cannabinoid-rich, quality oil, take a look at our selection of CBD oils.

Edibles are another excellent option for consuming cannabis while ill. Look for candy or lozenges made with CBD or THC extracts to help ease your sore throat. Plus, you can also use cannabis oil to make delicious and nutritious soups that fight the cold or flu.